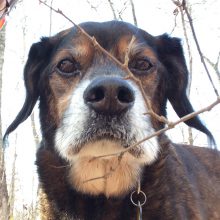 The text was short. “B gone. Talk another day.” I was expecting it, but that didn’t make the message any easier to accept.

My son had called the night before. “Boguey’s not doing well,” he said. “He didn’t get up to greet me. He didn’t eat his dinner.”

Jeb, now forty-one, was twenty-five and paddling with a friend on the Chickasabogue River near Mobile where he lived when the little hound dog swam out to meet the kayak. A search of the camp grounds and a conversation with the park manager turned up no one looking for a lost puppy. A hamburger dinner for the pup on the way home sealed the deal, and a beautiful sixteen and a half year relationship was begun.

Boguey stayed with us in New Orleans for a couple of months until Jeb could move into a pet-friendly rental in Mobile. Every week-end, Jeb drove almost 300 miles round trip to visit him. Every Friday, Boguey’s silky ears perked when he heard the old Honda Accord pull into our driveway. Every Sunday, he looked at Jeb in hope of making the return trip with him. There was no doubt in Boguey’s mind that he was Jeb’s dog.

Boguey and Jeb were pals. Two carefree bachelors having fun. Boguey went to dog-friendly bars, hung out with the guys, drank and ate strange things—Jeb’s sofa being one of those things. But what’s more important to a single guy? Sofa or dog? The dog wins hands down every time.

People grow. Relationships change. Boguey knew better than most humans the importance of adapting to change. Girlfriends, girlfriends’ dogs, the occasional cat, long work hours as Jeb’s responsibilities at the newspaper grew—he took it all in stride. He and Jeb were a team, and Boguey valued that team more than anything.

Eight years ago Jeb met Sarah, the young woman who would become his wife. She and her little rescue Chihuahua, Cheshire, became part of the family. The Chihuahua ruled the animal sector of their house, and B was okay with that. One particularly cold February, Jeb and Sarah rescued a German shepherd stray who had been roaming the neighborhood for a few weeks. Fritz  joined their family, and Boguey accepted him, also.

January, two and a half years ago, Boguey faced the biggest challenge of all. Jeb and Sarah introduced him to this tiny, little human—their newborn daughter. The old guy was fourteen and very much a confirmed guy’s dog. What’s a fella to do? Boguey did as he had always done, he adapted.

In spite of failing vision, diminished hearing, painful arthritis, and, finally, doggy dementia, Boguey accepted and loved—first the infant who commanded so much of Jeb’s attention and then the toddler, who took his toys, spilled his food and water, and occasionally ran into him while riding her Tyke Bike in the house. His patience was rewarded as she grew older. She affectionately called him BoBo. She learned to pet him gently, feed him his dinner, and step over him when he was no longer able to move out of her way.

Now he’s gone, but his legacy remains. To live well, we must love well, place others above ourselves, and we will be rewarded with a rich and love-filled life.

To Boguey and a life well lived. Rest in peace, loyal friend.

Meet Walter as he
explores the French Quarter.